If you ask me where would I like to go if I could time travel I would instantly reply to Roman or Greek Empire in the peak of their glory. However, on a second thought, I may take my words back and say "Meh! I am good here in 2017. It is a pretty good time to be a woman and commoner." 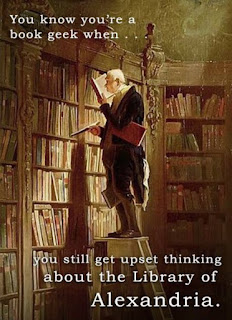 The Royal library of Alexandria was one of the most notable libraries of the ancient times. It was a part of the think tank based in Alexandria called the Museum of Alexandria. The Museum was founded and patronaged by the Ptolemaic dynasty in the 300 BC.  It was dedicated to Alexander the great by his right-hand man Ptolemy. The museum was the forerunner of our present day research institutes. A university where scholars from distant lands went to further their study in all sorts of subjects. Museum- a place to muse where philosophers and thinkers gathered and did the thinking and exchanged the ideas. Unlike what we now know to be a museum, a place to display ancient artifacts. The current usage of the word museum was first spotted on in the 1600s. In ancient times Museum was a thinking place.  The royal Museum was also referred as Temple of muses that included idols of pagan Gods. I stress the word "Gods", the polytheistic, good old fashioned Gods because it is kind of a reflection to why we don't have this library today. #Cringe 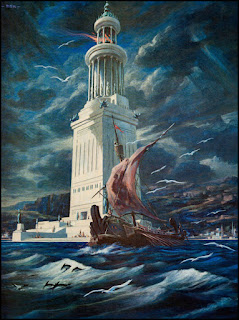 The city of Alexandria was situated on a harbor with the most glorious lighthouse of past one of the seven wonders of its time.The traders sailing through the Mediterranean often stopped at this Port. The marines who came to the port were often searched for drugs, did I say drugs? No! books, they searched the sailors and passer-by for the BOOKS. Such was the passion of the Ptolemaic dynasty towards collecting scripts. When the Books (scrolls) were found, they were confiscated and the person carrying books was compensated for the text. The books were then sent to the collection to the library of Alexandria. Alexandria was the hub for its vast collection of information pretty much like our internet. If there was any written material Alexandria probably had a copy of it.

No one knows what was the extent of the collection in the library, but many people believe that its destruction probably threw humanity a century behind in its course for the pursuit of knowledge. One of the most revolutionary inventions was the invention of the Steam Engine in the late 1700s. It changed the course of the human race, as they knew it at that time. In the museum of Alexandria in ancient Egypt scholars such as  Archimedes, Vitruvius, Heron ho Alexandreus, Hypatia and Ctesibius (and many others) were enrolled. Many of them were working on harnessing the energy from steam and wind. One such example is Aeolipile a precursor of the steam engine by Heron. Arguably, the purpose of getting machine power to eliminate human labor may not be the motivation of the engineers of Alexandria ... after all slaves were there to do that! It may have taken humanity some time to up its game on human rights, but regardless the work was in its nascent stage and would have been eventually put to application had the library of Alexandria not been destroyed. 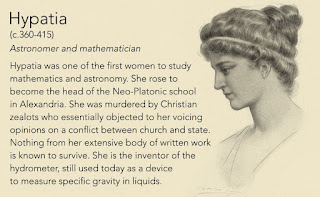 The destruction of the library is often attributed to multiple instants and is disputed over by historians, but one thing is certain the library was completely eliminated by 642 AD. It is not known which of these events is responsible for destroying the library to what degree. However, majorly four recorded events are held responsible for it altogether. 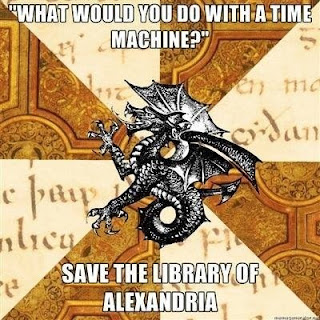 The first destruction is on the hand's Roman republic during the siege of Alexandria in 48 BC.  Julia Caesar burned his own ships to distract his enemy and the fire started by Caesar's soldiers went astray and burned down a section of the library.  It was still not completely destroyed as Alexandria was still the scholar's hub during the time of Augustus of Roman Empire. 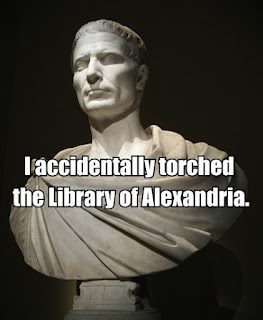 The second destruction was an attack on the Alexandria by the Aurelian in the 270 AD, during the fighting of this era the area where the library was situated was destroyed some of the content of the library may have been destroyed.

The third destruction was the order of the Pope/ Emperor Theodosius in 415 AD, under his reign Paganism was made illegal in Rome. During this time the empire was rioting. Every temple was shut down or destroyed by mobs. It was during one of those days when Hypatia, a female Mathematician of Alexandria, was murdered by the mob. After her death, the museum of Alexandria along with the temple was sacked the library was rampaged in the riots. 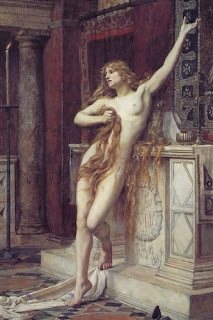 Lastly, the destruction or the annihilation of whatever was left of the scrolls and books is attributed to the Islamic caliphate of second Caliph Omar/Umar in 642 AD under the command of Amr ibn Al-As during the Muslim conquest of Egypt the fate of library was put to the hands of Caliph by Amr the commander of Arab army. He wrote to the caliph and received a reply (and I quote). ”If those books are in agreement with the Quran, we have no need of them; and if these are opposed to the Quran, destroy them."

Even if we could not technically advance as a civilization in spite of the great library. As a book nerd, I still would have cherished the ancient plays and literature that is lost in the time. How do you think humanity would have been had we still had the library in its ancient form intact? Comment Down below. Let us muse here in this comment section in memory of The Library of Alexandria. 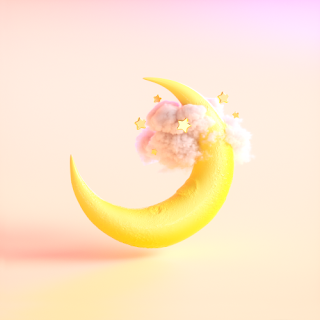 Find me on the following; #SocialMedia
PS. I understand that the last destruction by the Caliph is often controversial (Most of them are as I mentioned in the post.) I have provided the link to the sources in that section. The mentioned quote is there on the Wikipedia as well. Moreover, I think I must include this Islamic site that infers more or less the same narration. Please click here to reach the site. This link is already included in the given site so I didn't worry to add while writing but in light of providing the source I must include it as well.
at April 02, 2017