In this post, I explain the contribution of Stephen Hawking to the field of science.

The current understanding of the universe implies that the universe had a beginning and so most likely will have an ending. But today is not the day for the life cycle of the universe. Today, I want to write about a magnificent chunk in the universe the Black holes. That, apparently, like to do its own thing. Very introverted part of our space-time. The more we learn about it, the less we know. Black Holes are complex and I understand that you would rather say why should we care? Well, because Homo Sapiens are curious beings and it is a product of our curiosity that we are currently ruling the planet. It is pretty much a basic instinct for humans to understand this world. So I decided to post about how black holes annihilate. Apparently!


The black hole is a supermassive ex-star. It is so heavy and so tiny that its escape velocity proceeds the velocity of light. and hence nothing can ever escape it not even light. The center of a black hole is considered to be a single dimensionless point where all its mass is concentrated. This center is called Singularity and an imaginary boundary around a black hole beyond which no light can escape is called its Event Horizon. Anything inside the event horizon is basically out of our reach because inside this imaginary area objects are in the clutch of the gravity of black hole. We know nothing about the insides of the black hole. 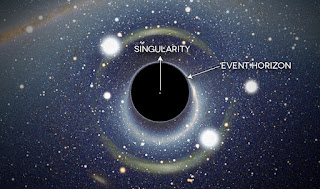 The black holes are formed from supermassive stars. However, what we are going to explore in this post is the death of black holes. The black holes die by evaporating. I know it seems very unintuitive as nothing can escape from the black holes, not even light! Then how can a black hole evaporate? Here is where Stephen Hawking's work comes into the play. Hawking, in his work, predicted that black hole emits radiations called Hawking Radiations.

Since black hole sucks in everything falling inside the event horizon. The emission of hawking radiations seems uncanny. What happens at the event horizon of a black hole is something that explains this phenomenon. However, to understand that from the prospect of the current understanding of science we must dip our toes in a bit of Quantum Physics. Yeyyy!

My main domain is Mechanical Engineering and for that, I don't 'need' to study Quantum Mechanics. The Gravitational Mechanics works just fine for all practical purposes in contemporary stuff. In fact, it kinda works well for almost everyone except the physicists. However, I find myself dipping my toes in the pool of Quantum world every now and then. More than often, I just want to jump in and dive deep in quantum physics because it is just so fucking intriguing one cannot study it and not feel the sense of awe about ... well, basically how nonintuitive the quantum world is from our basic understanding! So, let us begin this is enough fangirling for the day.

The space-time has this constant electromagnetic field all across it. In Fact, there are two fundamental fields in nature: gravitational field and electromagnetic field. Now, The vacuum is a state in the universe where the electromagnetic field is in its lowest energy state. So it is considered empty, as there are no particles, say photons or any matter,  propagating through or present in the field. However, the vacuum that we consider to be empty is not really empty, all the time. In the vacuum of space, there are often many particles popping up into existence. These particles appear in pairs. Each pair consists of a particle and an antiparticle having an equal magnitude of negative and positive mass (Matter and anti-matter, thus matter/mass is not being created.).  They come into existence out of nowhere from the same spot and vanish when they collide with each other. These particles are called Virtual Particle.

The lost particle leaves its pair right outside the event horizon. The leftover virtual particle then becomes a real particle, in absence of its anti-particle. It gets a mass equivalent to the mass that the black hole loses.  These particles that come into existence at the event horizon of a black hole propagate through the space-time in the form of radiations. From an outside perspective, it appears that the black hole is emitting radiations. These radiations are the Hawking Radiations. Is the matter is being created? Not at all! The physics is not collapsing in this stance. It is only the mass of the black hole being converted into the energy of the radiations. E=mc^2 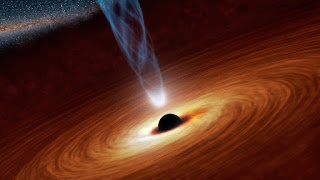 We haven't yet observed the total annihilation of a black hole, but it is only a matter of time. Moreover, our observation of a real time a black hole is pretty recent via Gravitational lensing (that's a topic for another day). The scientists at CERN lab are working to create a microscopic black hole in the lab to observe it vanish after emitting Hawking's radiations. #WaitForIt

The beauty of hawking's work is that it simply turns the black hole from a massive evil monster to a kind of a recycling center of the universe.  What is your opinion on black holes? Talk nerdy to me in the comment section.