When I was a little girl of nine or ten, I was playing on a summer noon on our porch. I clearly remember that afternoon. As that very noon I was a spectator to a tragedy. A little bird crashed into our veranda's fan. It was an instant death. Being present there I felt the agony of death in its last squeak. I couldn't do much for the bird I wanted to save it, of course, but sadly could not bring it back from the "other side". I did the only logical thing one could do. I decided to organize a small funeral and bury it. I selected a spot under the cordial tree and buried it with made-up rituals.

It was a long evening and by the end, while I was covering it with mud and a thought crossed my mind. 'I must mark this exact spot. I should have wrapped the body in a hanky'. Even when the burial was not complete I was thinking about the exquisite skeleton of a house sparrow. The telly those days had a lot of news of finding the bones of dinosaurs. I, being the nerd that I am, wanted my own skeleton of the future generation of dinosaurs. By the end of finishing the bird's grave, I secretly decided I am going to get my skeleton. I marked the spot with a little stick flag. Over the next few days, I enquired the grown-ups about, how long it takes to get a skeleton from a buried body? (Wonder why no one thought it was weird!). Different people gave different answers. I came to a conclusion that for a bird a month was enough. I lost my patience on the twenty-fifth day. 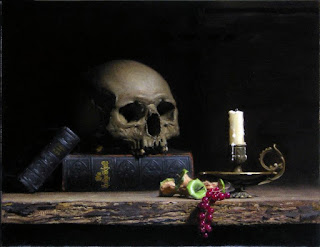 I dug the marked grave and found only a skull and few thin rib bones. I think my digging disturbed the tiny bones and I couldn't find the whole set. I decided to keep the skull only. I prepared a cool spot to place my collection in my private museum. A green plastic basket padded with cotton, on my study table. I kept it and was proud of my possession. It made me remember the last squeak of the bird. My desk resembled one of those old paintings of human skulls on a table. Thinking about the classic painting having pretty much same work desk as I did, made me feel sophisticated and nerdy at the same time. Until my Mum spotted it... sigh!

Those old paintings that inspired me to decorate my workspace, where I use to complete my homework on multiplication assignments from school. Is a specific genre of art called Memento Mori (also vanitas). It depicts the symbolism objects that signify death (namely skull) To remember the infallibility of Death. Such artwork is an artistic expression to remind that death is the objective truth to all and one must spend life wisely. 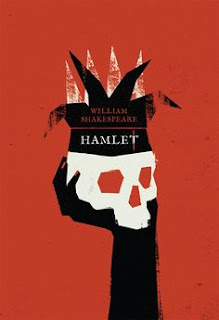 If you are a Shakespear's fan you must have read The Tragedy of Prince Hamlet, one of my absolute favorites. Shakespear, being the genius that he was, used the symbolism with a skull in the Hamlet.  In the play, Act-5 scene-1, Hamlet holds up the skull of Yorick,  King Hamlet's jester, and remember's his childhood memories with Yorick. It is a brilliant scene ...  I will spare you by not writing the whole scene, but if you are curious you may read the scene here. I think Shakespeares perfected the notion of Memento Mori in that very scene.

So where does this term comes from? In the Roman days, when a general would win a battle, there use to be victory parades with the crowd use to cheer and hail the victor. In all that cheering and hailing there was one appointed servant who would whisper a Latin phase in the general's ear


Its purpose is obvious, to remind the General while he basked in the glory of his victory that his demise is still inevitable. Probably to keep him grounded. Frankly, If I was the General I would be pissed. I mean, let me have my moment of fame and glory. Jeez! what a killjoy! 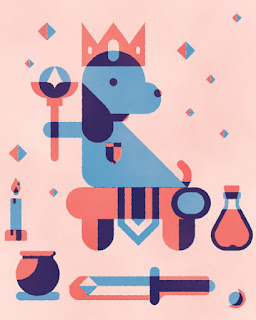 I know death is a not a topic anyone wants to talk about happily. Heck! I even wrote about Immortality on my previous post. However, Once in a while, it is wise to stop and think about Death. A reminder of death makes you consider what you want to do with the life you have.

Email ThisBlogThis!Share to TwitterShare to FacebookShare to Pinterest
Labels: A to Z blogging, A to Z Challenge, Philosophy